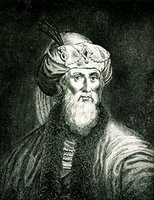 Josephus (c. 37 AD/CE – c. 100), who became known, in his capacity as a Roman citizen, as Flavius Josephus, was a 1st century Jewish historian and apologist of priestly and royal ancestry who survived and recorded the Destruction of Jerusalem in 70. His works give an important insight into first-century Judaism.

Josephus, who introduced himself in Greek as "Joseph, son of Matthias, a Hebrew by race, a priest from Jerusalem", fought the Romans in the First Jewish-Roman War of 66-73 as a Jewish military leader in Galilee. However, in circumstances that are somewhat unclear (see also Josephus problem), Josephus surrendered to the Roman forces invading Galilee in July 67. He became a prisoner and provided the Romans with intelligence on the ongoing revolt. The Roman forces were led by Flavius Vespasian and his son Titus, both subsequently Roman emperors). In 69 Josephus was released (cf. War IV.622-629) and according to Josephus' own account, he appears to have played some role as a negotiator with the defenders in the Siege of Jerusalem in 70.

More...
Posted by Zhivago of Tookland at 5:34 AM
Labels: Flavius Josephus, Jerusalem