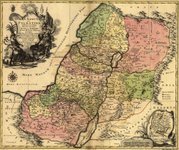 Israel had 12 sons, as follows: Reuben, Simeon, Levi, Judah, Dan, Naphtali, Gad, Asher, Issachar, Zebulun, Joseph, and Benjamin. (Jacob was renamed Israel Gen. 32:27-29)
The Tribe of Levi was set apart from the others in the sense that, the members of the Tribe of Levi were to be in charge of the tabernacle of the Testimony. (see: Num. 1).
The Tribe of Joseph is not usually listed with the Hebrew tribes although Joseph is one of Jacobs twelve sons, the eldest of Rachel. It is sometimes referred to as the House of Joseph. Rather, the two tribes founded by his sons Ephraim and Manasseh are listed separately.

The Ten Lost Tribes are those from the northern Kingdom of Israel who were deported by the Assyrians in the 8th century BC to Khorason. In Jewish popular culture, the ten tribes disappeared from history, leaving only the tribes of Benjamin and Judah and Levi who evolved into the modern day Jews.

More...
Posted by Zhivago of Tookland at 8:42 PM
Labels: Israel